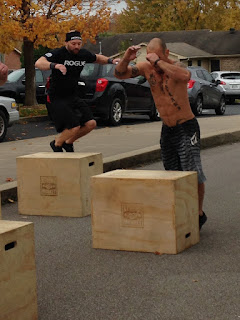 Matt Biolsi
DCL Blog #2
It’s time to clear up some misconceptions of explosive training.  Lately, I’ve been working with a couple of rugby athletes and they were asking me to help improve their “explosive power”.  Even though I knew the answer already, I decided to inquire about what their coach had them doing to improve their explosive power. They answered, “power snatch and power cleans.”  This is the common answer I get when people talk about explosive training.  When it comes to strength there are several different forms.  There is absolute strength, speed-strength, strength-speed, and explosive strength.  One must be proficient is all forms of strength.  When it comes to explosive strength, I have learned there are a lot of misconceptions.  I feel there is a major misconception about what explosive power really is.
The definition of explosive strength is “the muscles ability to display significant tension in a minimal period of time”.  What does this mean?  Well, in simple words, jumping!!!  Explosive force is built by jumping!  Olympic lifting is considered, by some, to be an “explosive sport” but Olympic lifting is a speed-strength sport.  The confusion lies in the definitions of the two.  “Speed- strength” is defined as “the ability to overcome resistance with a high speed muscle contraction”.  So, we have speed strength and explosive strength.  When we jump, we have a fast eccentric motion countered by a fast concentric motion.  This is the basis of explosive strength.  The faster and more powerful we over come the eccentric (downward) movement, the greater the explosive power.  If you need an example of this, try bending your knees, pausing, and then jumping versus a quick dip and drive and see which produces better results.  The father of jumping and explosive power in the old Soviet Union was Dr. Yuri Verkhonshansky.  The studies that he performed on his athletes are detailed in the book “Special Strength Training Manual for Coaches”.  He discovered the phenomenon of stretch reflex while working with Soviet triple jumpers.  Dr. Verkhonshansky prescribed many different variations of jumps in order to build explosive power in Olympic level sprinters and Olympic Weightlifters.  I build explosive power in my athletes by doing various types of jumps.  We do jumps from knees, jumps with weights, broad jumps, and various other jumps.  Dr. Verkhoshansky prescribed up to 80 jumps a week.  We do these jumps on Tuesdays and Thursday’s.   This allows us to do 40 jumps on Tuesdays and 40 jumps on Thursdays as our “cash out” work.  In the conjugate style system, we consistently change the style of jumps to prevent accommodation.  We typically do one style with weights and one body weight style jump.
How do jumps help us in sport?  Explosive power is displayed in sport performance.  It is displayed in the acceleration off the blocks in sprinting and in the Olympic lifts.  This is where the confusion lies.  Olympic lifting displays explosive power but it doesn’t build explosive power.  As Russian scientists have said, the speed strength index, (which is the ratio of maximal force to the time it takes to reach it) is utilized for the quantitative assessment of explosive strength.
Now, I don’t suggest just going right into weighted jumps and different styles of jumps without first conditioning your body to start a jumping program.  Jumps are very stressful on ligaments and tendons.  It is critical to properly warm up and strengthen these before starting a jump program.  Hamstring curls with ankle weights and banded hamstring curls are great ways to increase the strength of the tendons and ligaments before you start a jumping program.  In the sport of CrossFit, you must beware of people doing rebounding box jumps.  Those that follow the sport will remember Julie Foucher rupturing her Achilles’ tendon during a chipper in regionals.  This is common in people who fail to allow their heels to touch the ground during jumps.  When this is done, the Achilles’ tendon is under constant load.  The tendon can only handle so much tension before it ruptures.
Rebounding box jumps are a form of depth jumps.  Many pro athletes because of the high risk involved, though very effective in building explosive power, avoid these sorts of jumps.  I advise all athletes to beware the dangers of not prepping before doing rebounding box jumps.  I’m not saying “don’t do them”, but I am saying make sure your Achilles’ is warmed up before you go about training them.
Explosive training is a critical part of athletic training.  What I have noticed is a lot of coaches don’t know how to build explosive power.  All strength and conditioning coaches should know the difference in all forms of strength.  When you train your athletes, you have to train for their specific weaknesses and know how to train those weaknesses.  When it comes to explosive training, learn how to train optimally!!
On February 15, 2016   /   best in clarksville, built in the lab, created in the lab, crossfit, crossfit dcl, CrossFit Dunbar Cave Lab, crossfit in clarksville TN., dcl weightlifting, weightlifting   /   Leave a comment